Title IX: Back to the Future 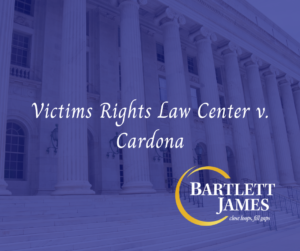 On July 28, 2021, The Honorable William G. Young, a Senior U.S. District Judge for the District of Massachusetts, issued a ruling in Victims Rights Law Center v. Cardona, a case brought by a collection of individuals and advocacy groups challenging thirteen provisions of the Title IX Final Rules, issued in 2020 under the Trump administration Department of Education.  While he upheld twelve of the challenged Final Rules, Judge Young found that one rule, the cross-examination rule, was arbitrary and capricious.  That rule required a hearing Decision-Maker to disregard statements made outside of the hearing by parties or witnesses who did not appear subject themselves to cross-examination at the hearing.  Judge Young blocked enforcement of that rule in Massachusetts and remanded the rule to the Department of Education for further consideration and explanation.  On August 10, 2021, Judge Young applied his decision nationwide.

In explaining why he struck the rule, Judge Young gave an example of a respondent who had made pre-hearing admissions and statements of his guilt, but who chose not to testify at the hearing in order to keep those statements from being admitted into evidence.  Judge Young noted that by doing so, such a respondent would be putting a full and fair hearing on the facts out of reach of a complainant.

We note that the import of Judge Young’s decision and the Department of Education’s response, is that Title IX hearings may now be essentially, governed by pre-2020 Title IX regulations that many critics claimed lacked basic due process safeguards for respondents.  As it stands now, a complainant can make a pre-hearing allegation or statement, then choose not to testify or be questioned at a hearing he or she has initiated. A respondent might later be found responsible for the alleged conduct, based solely, or in part, on the unchallenged statements of the complainant or witness, without ever having had a chance to cross-examine or confront the accuser.

The highly-experienced Decision-Makers at BartlettJames are experienced and sensitive to the issues involved and will help ensure that your institution will conduct a legally-defensible and appropriate hearing under the ever-evolving Title IX regulations and Department of Education interpretations.

DEI: A View Toward a Measure of Justice
Scroll to top