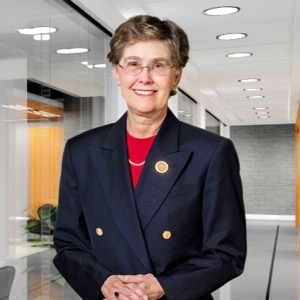 Margaret serves on the BartlettJames Higher Education Team. The wisdom she earned during her highly-distinguished career routinely proves invaluable to our clients.  She has enjoyed more than 30 years of service as the United States Attorney for the Eastern District of North Carolina, as a renown legal educator and law school administrator, and as a staff member for a United States Senator.  She has also served on multiple boards of directors and engaged in a private law practice representing clients before state and federal administrative agencies.  Margaret is based in North Carolina.

For more than 30 years, Margaret served the Campbell University School of Law in myriad capacities.  She taught a wide variety of subjects with immediate relevance to clients of BartlettJames, while also serving as the Associate Dean for Academic, Student and Administrative Affairs, as an Assistant Dean for External Relations, and as the founding Director of Campbell’s nationally-recognized Externship Program.  Margaret has served as lead investigator in numerous Title IX investigations for numerous university clients. Likewise, she has presented Title IX educational programs to several higher education clients. She has also conducted specialized investigations into matters involving the sexual mistreatment of minors.

Of significant note, Margaret was appointed by the President, confirmed by the U.S. Senate, and served as the United States Attorney for the Eastern District of North Carolina for five years—a position as the chief federal attorney for civil and criminal matters in 44 out of the 100 counties in North Carolina.  Subsequent to that position, she has continued her federal work by serving in the National Association of Former United States Attorneys (NAFUSA) for the past three decades, including several terms on its Board of Directors and all the offices in its leadership chain, culminating with President in 2003-2004.

In addition to her work in legal education and as a United States Attorney, Margaret has also served for the past ten years on the North Carolina Rules Review Commission, including stints as the Chairman and First Vice-Chairman.  The Rules Review Commission is the state agency created by the General Assembly to review and approve rules adopted by State of North Carolina agencies.  She further serves or has served on multiple Boards of Directors for the North Carolina Bar Association and the Wake County Bar Association/10th Judicial District Bar, while also serving on and chairing the Wake County Board of Elections.   In recognition of her exemplary service to the State of North Carolina and her community, Margaret was awarded the Order of the Long Leaf Pine, the most prestigious award conferred by the Governor of North Carolina.